By now, we’ve all heard the speech in a hundred restaurants.

“Our concept is small plates to share,” explains the waiter. “We recommend ordering multiple dishes and passing them around.”

The message is so common that anyone who insists on ordering an old-fashioned main course and eating it alone must be feeling uncool. Large plates, not made to be shared? It’s so 1995.

But look beyond appearances, and there’s another story to tell here: Main courses aren’t just out of fashion. They also lag behind in innovation and creativity. The main course has a real identity crisis.

I have spoken about the “main course problem” with a number of chefs in the city. Sensibly, no one wants to be quoted for fear of accidentally insulting their colleagues or themselves. But many cooks, food writers and other insiders agree that sharing an array of entrees and sides is their favorite way to dine.

It is also my preference. Appetizers have become more creative during this gastronomic era, driven by ultra-seasonal produce, trendy items like deli meats, and a global supply chain that allows, for example, landlocked cities like Dallas to serve fresh and raw seafood. Small plates became outlets for imaginative ideas and flavors so bold they would be overwhelming in a larger serving.

I could go on listing the favorites, but if I did, we’d never get back to the point.

Main courses, on the other hand, remain a bastion of culinary conservatism. There will probably be a large piece of meat with some vegetables on the side. You will have the choice between beef, pork, chicken or fish. The fish will usually be salmon. In the lyrics of Saturday Night Live motivational speaker Matt Foley: Well, la-de-frickin’-da.

There are several reasons for this state of affairs. The simplest is that many people still want to eat a large piece of meat. For Dallas kitchens, a good cheeseburger is almost as mandatory as a health inspection. The meat and two veggie model is so deeply embedded in American culture that we export it to other parts of the world.

Besides customer demand, there are other reasons why old-fashioned main dishes persist. They are easier to explain on the menu. They can be the spectacular centerpiece of an evening. Texas has some of the best local beef and pork producers in the country. And figuring out how many “sharing plates” to order takes some guesswork.

We can still do our best to promote more inventive and diverse main dishes. For every possible downside, there is a possible solution, such as consumer education, clever marketing, creative formats, and adding vegetable-based options.

The rise of small plates is already a triumph of consumer education. But many menus leave branding opportunities dangling, with dry descriptions that simply list ingredient names like culinary bingo cards.

A well-written menu can sell a creative dish. In Houston, 93 Til lures diners to the vegetarian section with “Movie Theater Cauliflower.” In Austin, Suerte serves a selection of “Snackcidents”. Chinese cuisine has long known the power of evocative names like biang biang noodles (named after the sound of batter slapping on the counter), century-old eggs, beggar’s chicken, and hot pot. 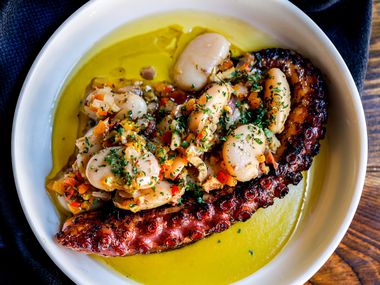 Some Dallas restaurants use creative catering formats to create exciting entrees. Meridian serves up family-style dishes for the whole table, like its attention-grabbing grilled octopus. The fried chicken at Roots comes with a collection of small side dishes and toppings, like a southern version of banchan.

It’s surprising to come across restaurants in 2022 where every option revolves around a piece of meat. Vegetarians and vegans are a growing population, and there is strong evidence that the the world would get better if we all ate less red meat. Even if you disagree, you’ll concede that there are many delicious dishes in which meat is a secondary player, not the star.

Some Dallas restaurants are thankfully thinking beyond the steak by using cuts other cuisines might throw away (like Petra and the Beast) or building main courses around vegetables (like Roots, Sachet and Elm & Good). Meridian serves up a brilliant modernized take on moqueca, the Brazilian seafood stew. The Charles makes a fashionable feature of pies.

If you like a good pork chop, this is great; U.S. too. But if you want to see more off-the-beaten-path, off-the-beef big plates at top restaurants, vote with your wallet and encourage our chefs’ bolder ideas.

New formats, vegetarian options, less common cuts and clever marketing could help rouse the main course from its ultra-traditional meat and potato funk. But many foodies will still live off the appetizer section of the menu. Small plates will never concede their main advantage over large ones: they are smaller. You can taste more flavors and order more things.

And, in a great restaurant, I want to try as many things as possible. 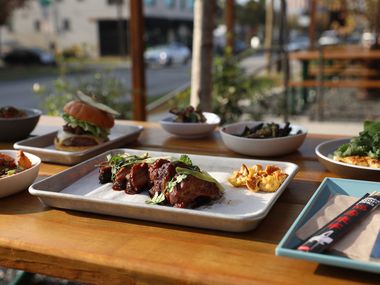